Murder Under The Covered Bridge
by Elizabeth Perona 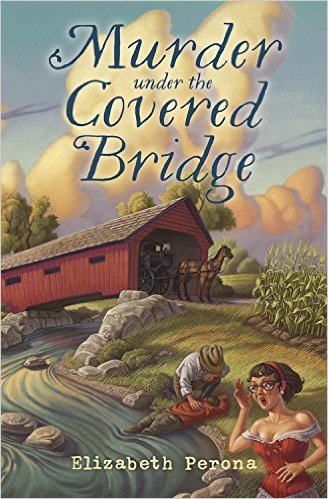 Murder Under the Covered Bridge
(A Bucket List Mystery)

Working on a television taping to promote the Parke County Covered Bridge Festival, the ladies decide to use their access to the Roseville Bridge to cross an item off Charlotte’s bucket list: #39) Be a Sexy Calendar Girl. But the photo shoot is interrupted by gunshots and Francine’s cousin William stumbling down the riverbank followed by a man with a gun. William sustains life-threatening injuries, but is it homicide?

Francine and Charlotte go into detective mode to uncover the secret William knew about the shooter. Their success, however, depends on surviving two arson events, a séance, a shortage of Mary Ruth’s wildly popular corn fritter donuts, memory-challenged nursing home residents, and a killer who refuses to go up in flames.

A Matter of Whimsy

The second book in the Bucket List mystery series, Murder under the Covered Bridge, introduces something that may feel new to our writing, an element of fantasy, but it’s really nothing new. If you read the first book carefully, you’ll see that it’s an extension of what is already one of the fun aspects of the book—whimsy.

The women of the Bridge Club have a knack for getting themselves in trouble. They go from trying to skinny dip at midnight (their escapade hidden away from the world) to being on Good Morning America a couple of days later. The transition from one to the other makes for a hilarious situation, and that makes it a great deal of fun for us. But the truth is, it borders on farce. It really couldn’t happen. The next step, which we’ve plunged into with the new book, is to add another element that couldn’t happen, not because the likelihood is so minimal as to be zero, but because its real counterpart has never been discovered in the natural world – a spring with restorative powers.

But could you believe in such a thing? People certainly have in the past. History.com reports that Alexander the Great was said to have come across a healing “river of paradise.” In the fourth century B.C., they report, similar legends cropped up in such disparate locations as the Canary Islands, Japan, Polynesia and England. In the early twentieth century, the spring mineral waters of places like Hot Springs, Arkansas and French Lick, Indiana, were reputed to have healing powers. Spas were created around these warm mineral baths, and tourists, desperate for cures from various ailments, flocked to them.

It’s our contention that even today, people believe. A quick scan of newspaper “advertisements” (which are made to look like authentic news articles but whose true purpose is revealed by the hard-to-spot disclaimer “advertisement” at the top), shows that people are not only still looking for miracle cures but will spend real money on the hope that they exist. So people still believe.

We believe it’s fun to consider the possibility of such waters. This won’t be the cornerstone of every mystery the ladies will encounter, we promise. It’s just one of the complications of life they’ll be wrestling with. (At least, Francine and Jonathan will wrestle with it. Right now they’re the only ones who know.) The hallmark of the Bucket List series, which is the good humor of the good ladies of the Summer Ridge Bridge Club and the nearly farcical circumstances in which they find themselves, will remain intact.

Trust us, it’s all whimsy. Elizabeth Perona is the father/daughter writing team of Tony Perona and Liz Dombrosky. Tony is the author of the Nick Bertetto mystery series, the standalone thriller The Final Mayan Prophecy (with Paul Skorich), and co-editor and contributor to the anthologies Racing Can Be Murder and Hoosier Hoops & Hijinks. Tony is a member of Mystery Writers of America and has served the organization as a member of the Board of Directors and as Treasurer. He is also a member of Sisters-in-Crime.

Liz Dombrosky graduated from Ball State University in the Honors College with a degree in teaching. She is currently a stay-at-home mom. Murder on the Bucket List

was her first novel.

July 9 – Around the World in Books – SPOTLIGHT

July 16 – Escape With Dollycas Into A Good Book – SPOTLIGHT