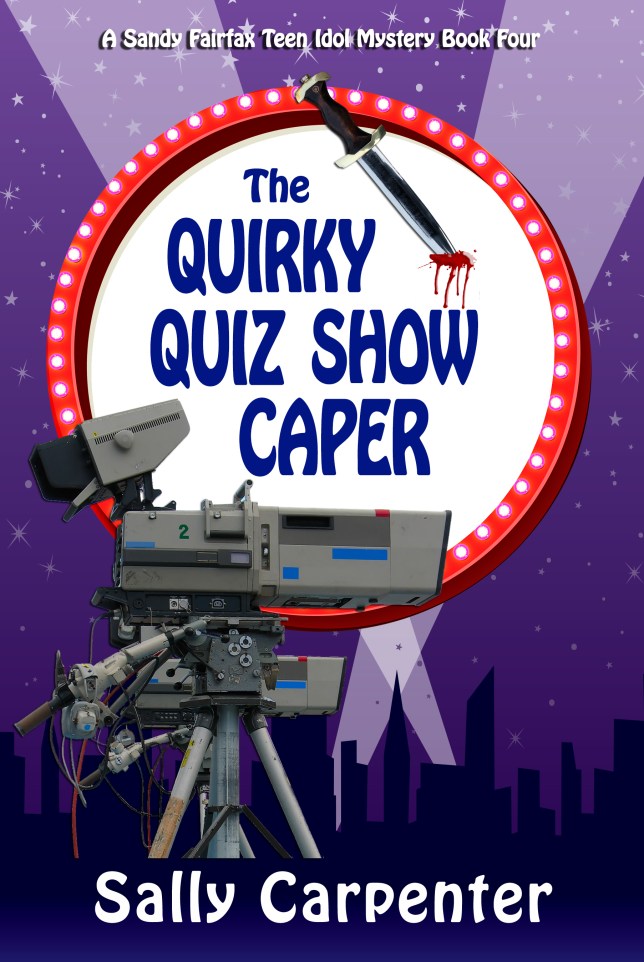 38-year-old formal teen idol Sandy Fairfax is a guest panelist on a TV game show–and the first category is murder! When his brother, a college professor is framed for the murder of one of his student, Sandy investigates, in between fighting with his ex, visiting his kids, wooing his new girlfriend, and presenting a concert at a black tie gala to save his father’s orchestra. Sandy’s ready to tear out his long blond hair as the game points and suspects pile up.

Summertime in the library

At this time of year many people are away on their vacations. When I was a kid, I spent my summers in the public library.

My family lived outside a small Midwest town. The city had no bus service, so I couldn’t go into town and if I did, the recreational opportunities were limited to a bowling alley, a one-screen movie house, a soda fountain and some stores. Perhaps that’s why I spent my leisure time reading.

During summers, Mom didn’t let us kids watch TV during the day, and it was too hot to spend much time playing outside, so I read. The family didn’t have many books at home. Mom had a subscription to Reader’s Digest condensed books, so I found most of my reading material at the library.

That two-story brick library, on the outside, still pretty much looks the same today. One climbed a long concrete stairway up a small hill to reach the front door (no handicap ramps back then). I’m sure the inside is different today—no computers in my time!

The children’s books were downstairs and the adult books were upstairs with a narrow stairway up and down—no elevator. Upstairs I roamed alone in the stacks. One section of books was hidden in little closet.

In the summer mom dropped me off at the library for a couple of hours while she went shopping. I’d grab an armful of books to checkout—I’d have them read in a day or two—then settle in one of the comfortable chairs to read until she picked me up.

The library then had the old card catalog system in two sections, a set of drawers of each side of the checkout desk. Sometimes I’d move from side to side to find what I wanted—or wait for a slowpoke patron to finish with the drawer I needed.

Modern libraries have a slew of special programs and entertainment for their summer reading programs, but back we didn’t have all that fun stuff. The library just gave a small cash prize to the three kids who read the most books.

The summer after eighth grade I finally won, knocking off about fifty books or so. My prize was a $50 savings account from one of the banks. Two boys garnered second and third place. The local newspaper took a photo of the three kids and I stood a head tall than the boys (I stayed taller throughout high school too).

Some days I’d look at the library bookshelves and think, “I’d like to have a shelf full of books with my name on them!” I’ve written four cozies so far, so it’s a start.

Carpenter also has a master’s degree in theology and a black belt in tae kwon do.

The Sandy Fairfax Teen Idol series is comprised of: “The Baffled Beatlemaniac Caper

” and “The Quirky Quiz Show Caper

She has short stories in two anthologies: “Dark Nights at the Deluxe Drive-in” in “Last Exit to Murder” and “Faster Than a Speeding Bullet” in “Plan B: Omnibus.”

To atone for her sins of killing fictional people, she also writes the monthly Roots of Faith column for the Acorn Newspapers.

She’s a member of Sisters in Crime/Los Angeles.

July 28 – Queen of All She Reads – CHARACTER INTERVIEW

July 30 – Reading Is My SuperPower – SPOTLIGHT

HOMICIDE IN THE HOUSE by Colleen Shogan

The Widows of Wildcat Ridge Book 13 by Charlene Raddon

Back Stabbers (The Country Club Murders) by Julie Mulhern