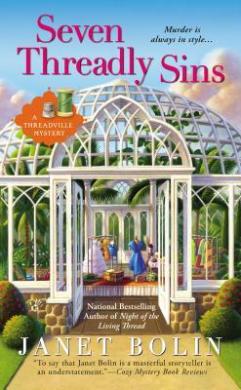 Threadville, Pennsylvania, is famous for its fabric, needlecraft, and embroidery, so it’s only natural that it would become the home of the Threadville Academy of Design and Modeling. While Willow Vanderling has certainly never wanted to be a model, here she is, voluntarily strutting her stuff in a charity runway show in outrageous clothing, all to support the Academy’s scholarship fund.

But the lascivious, mean-spirited director of the academy, Antonio, is making the fashion show a less-than-fabulous affair. After Antonio plays a shocking prank on Willow and her friends that doesn’t exactly leave the ladies in stitches, he mysteriously winds up dead—and someone is trying to pin the blame on Willow.

Now, she must do whatever it takes in order to clear her name, even if it means needling around in other people’s secrets…

I have not read the other books in this series but this is a stand lone read you won’t be lost or feel like you have missed out of anything.

This book was fantastic the clues where well done  and there are several to keep you guessing and the characters were great.  Antonio must have had an allergy and someone has hidden his meds.  Willow and her friends Dora, Ashley and Hayley try and figure out what is going on.

I will be reading more books by this author. Grand Finale for The Truth About Hope by Kate James

Interview and spotlight with Jenn Roseton