A Good Kind of Trouble
by Ellie Ashe 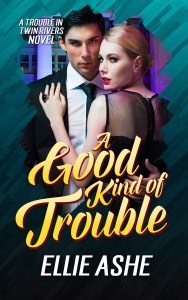 Synopsis:
Beacon news reporter Lindsey Fox is on the verge of breaking a huge story of political corruption that will make her career and make her famous journalist parents proud—or she could be thrown in jail and fired. It really could go either way.

Her recent streak of bad luck continues when Lindsey finds herself facing a bogus contempt charge—and attorney Ben Gillespie is appointed to get her out of the slammer. They once had a bad date of epic proportions—stilted conversation, food poisoning, burglary, towed car. Then there was the incident with the pepper spray. Lindsey never believed she’d see the sexy lawyer again.

Ben can totally believe that Lindsey is behind bars. The woman is trouble. Now he has to get his new client out of jail, keep her out of the grasp of a crazed bike messenger and a shady P.I., help her save her job, and convince her to put down the pepper spray and give him another chance.

The thing about writing, for me, is that I just love it so much. And yet… There are days when it is not easy. Difficult. Teeth-gnashingly, gut-wrenchingly hard. And I can’t imagine not doing it.

I know this makes no sense, so I made a chart to explain what I mean, using the creation of A Good Kind of Trouble as an example.

I was trying to fall asleep when a great idea for a title popped into my head. This was followed by the opening scene of a funny romantic mystery. Then the next scene, a chase scene. Yes! This could be a lot of fun. Then I got out of bed and started writing it down. This eventually became the first chapter of A Good Kind of Trouble, though at the time, it was titled Trust Me, I’m a Lawyer.

I was proudly a “pantser” when it came to writing. No plotting allowed! Let’s just see where this baby goes. I thought Ben and Lindsey’s story would be a short action-packed romantic mystery. Maybe a novella. That would be fun.

I was passing the 40,000-word mark and realized that I was nowhere near the end of the story. This “novella” was outgrowing its category. I was starting to become concerned, but the mystery Ben and Lindsey was unraveling was complex. The story kept surprising me with its twists. So it would be a short novel. No problem.

Or maybe it would be a long novel. The story had long since abandoned any idea that it could be contained in a novella. Ha! Yet more twists emerged, characters revealed unforeseen depth, and while I was still having fun uncovering all those details, I was starting to panic a little. I was at 80,000 words and I still couldn’t see the end. What if I couldn’t find a way to end this novel? Commence hyperventilating.

I have never been so happy to write two words in my life. At the time, they were my two favorite words among the 104,000 words that made up the book. This story had consumed me for a year and I was so happy to send it off for the first round of edits. I moved on to a new book in a different series. New characters, new dilemmas, a whole new world. Ben and Lindsey’s story, now called A Good Kind of Trouble, was behind me.

I was trying to fall asleep when I started thinking about Fiona Larkin, a minor character in A Good Kind of Trouble. She was interesting—a widowed single mother, and a lawyer. And what about that FBI agent, Matt Pritchard? Now that could be a minefield of conflict to navigate.

Or what about Ben’s new boss, the handsome and enigmatic Jude Fields? What kind of woman would it take to make him open up or settle down?

Oh, no. I was getting pulled back into the Twin Rivers universe.

But was that a bad thing? I mean, it was fun writing in that world. Maybe this should be a series.

And then I had a great idea for a title…

Ellie Ashe has always been drawn to jobs where she can tell stories—journalist, lawyer, and now writer. Writing quirky romantic mysteries is how she gets the “happily ever after” that so often is lacking in her day job.

When not writing, you can find her with her nose in a good book, watching far too much TV, or trying out new recipes on unsuspecting friends and family. She lives in Northern California with her husband and three cats, all of whom worry when she starts browsing the puppy listings on petfinder.com.

1 E-BOOK GIVEAWAY AT EACH STOP  Just leave a comment on what your favorite Cozy book is.

August 9 – Cozy Up With Kathy – Interview

August 10 – Queen of All She Reads – Review, Guest Post, Giveaway

Second Chance with the Billionaire by Janice Maynard, Recipe, Playlist and Q&A