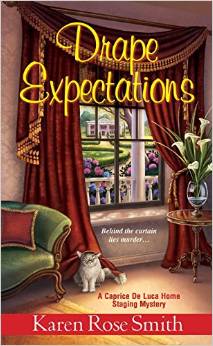 Caprice De Luca’s former client and now friend Ace Richland–an 80’s rock star–asks her for a favor.  Can she quickly stage his girlfriend’s house to sell?  Widow Alanna Goodwin, a transplanted Southern beauty, will be moving in with him!  Immediately Caprice realizes Alanna’s southern charm can be turned on and off at will.  Caprice agrees to stage Alanna’s Kismet antebellum-styled mansion for Ace’s sake.  But she soon learns Alanna doesn’t have a genuine love for her cat Mirabelle and also uncovers a plot her new client is hatching to sabotage Ace’s comeback.  However, before she can tell Ace, Alanna is murdered and Ace is the prime suspect.

As Caprice investigates, she learns Alanna had more secrets than pie safes.  With her Cocker Spaniel Lady by her side, she tracks down clues and adopts Alanna’s cat.  In the midst of some of her own family upheaval–her uncle has moved in with her parents–she finds herself with a dilemma.  Grant Weatherford, her brother’s law partner, advises Ace and reveals more of his past to her.  Seth Randolph, the doctor she dates, wants her to meet his family.  She must choose between them.

Danger stalks Caprice.  Will her refresher self-defense course save her life?  Only if she keeps her wits about her and Lady by her side.

Review:  I love Karen’s books she knows how to write to keep the reader turing the pages.  You will be kept on the edge of your set with book 4 of the A Caprice Deluca Mystery series.

Drape Expectations is the 4th installment in the Caprice De Luca Home Staging Mystery series. Caprice has been hired by her rock star friend Ace Richland to stage the home of his new girlfriend, Alanna Goodwin. Alanna is a Southern Belle but not as she seems.  Ace is the main suspect when Alanna is killed and Caprice helps him out.

Caprice has taken in Alanna’s cat, Mirabelle. Dom, Caprice’s uncle has come home, causing issues in the family and Caprice has reached the point where she must decide between two suitors, Grant or Seth.

Funny at times and gripping what more could you ask for in this great read! 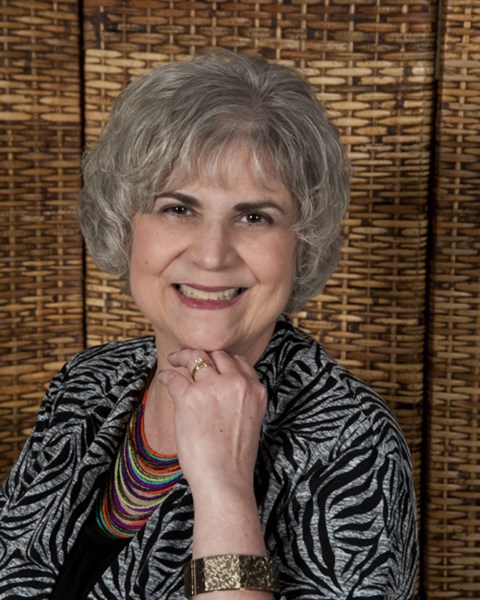 Award winning and best-selling author, Karen Rose Smith’s plots are all about emotion. She began writing in her early teens when she listened to music and created stories to accompany the songs. An only child, she spent a lot of time in her imagination and with books–Nancy Drew, Zane Gray, The Black Stallion and Anne of Green Gables. She dreamed of brothers and sisters and a big family like her mother and father came from. This is the root of her plotlines that include small communities and family relationships as part of everyday living. Residing in Pennsylvania with her husband and four rescued cats, she welcomes interaction with readers on social media.

She Dreamed of Dragons by Elizabeth J.M. Walker blog tour