About Land of Falling Stars
The United States is torn asunder by Civil War.
Two men, linked together by their love for one woman, Sophia
Whitfield, answer the call of duty.
An arranged marriage to Jesse James Grantham has been in the
works since Sophia and Jesse were children. When he leaves to fight for his
beloved South, he promises Sophia they’ll whip those Johnny Rebs in no time and
when he returns, they’ll get married under her mother’s rose arbor.
Sophia’s best friend from childhood, Gavin Langdale, enlists
to fight for the North. Why does she feel as if he’s taking her heart with him
the day he leaves for war? She loves Jesse…doesn’t she? 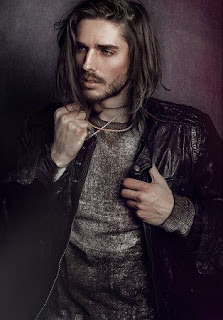 After Sophia’s parents die in a fire, she struggles to save
Arbor Rose. Most of the slaves have run off, the South is in tatters and so is
the only home she’s ever known. Another bluecoat is staggering down the hill,
coming to steal the last of her meager possessions. Before the hated enemy has
a chance to commit the vilest of acts, she shoots him.
And then discovers its Gavin, the champion of her youth.
Dark secrets lurk in Gavin’s memory, secrets much darker
than the despicable acts of war. He carries a message for Sophia, a missive
from Jesse. When he finds the courage to tell her what really happened to Jesse
on that bloody battlefield, she’ll hate him—hate him until she draws her last
breath.

A powerful story of lies, betrayal and a love
that burns brighter than all the stars in Heaven

“Land of Falling Stars lured me in immediately with its
lyrical title and instantly captivated me with the haunting love story of Gavin
and Sophia.” 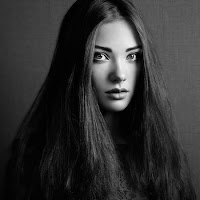 Setup and Excerpt: Mule Cooper and his son, Billy, set fire to Arbor Rose, Sophia’s beloved childhood home. During the attack, Sophia tripped and struck her head on the bedpost. Gavin carried her to safety after he killed Billy and his mangy sidekicks. Now…he returns to Sophia lying beneath an oak tree.
Gavin knelt beside Sophia and pulled her into his arms. Deathly white beneath the bright orange sky. Her breaths were shallow, the pulse at her neck weak. “Don’t leave me, Sophia. Please fight!”
Next to him, Ricochet whined and looked at Gavin with a bleakness he didn’t think possible in a dog. The hound’s ears flattened, and he jerked his head toward the long dirt road leading to the manor. Gavin tensed.
“Lawdy, Massah Gavin, we seen the red sky a mile off.” Brister hobbled forward, his cane working overtime. “What done happen?”
“Billy Cooper and his friends.”
Nap dropped to his knees, wide-eyed. “Miss Sophia.” A hand fell across his lips. “What they done to my lamb?”
“She hit her head on the bedpost when the fire broke out.” Sick with worry, Gavin turned to Brister. “She’s been out for an hour and her pulse is weak.”
“What’s we gonna do, Massah Gavin?” Brister whined. “She need a doctah.”
“Christ!” He glanced over his shoulder. The manor hissed smoke in its final lap, and the barn had been reduced to ashes. “The horses took off across the pasture, find them. If you catch Baby Moon, Mischief will follow.” He added, “Take Ricochet and he’ll herd them in.”
“Yes, sir.” Ol’ Nap scratched his head. “Then what?”
“Does old Doc Jenkins still practice out of his house in Fredericksburg?”
“Yassah,” Brister said.
Nap took in a quick hiss of air. “They’s blood all over the hound’s neck.”
“He didn’t like the way Billy talked.”
“He dead?”
“He wasn’t looking good the last time I saw him.”
Ol’ Nap’s broad face twisted with fear. “His Pa come for you now, Massah Gavin.”
Gavin’s voice spewed arctic air. “If Sophia dies, he won’t have to come for me.” Misery, acute and raw, twisted in his gut. Sophia dead? He would put a gun to his head.
Brister narrowed his eyes, leaned in and inspected the jagged tear on his cheek. “You best let me stitch up that cut.”
“I’ll have Doc Jenkins look at it.”
Her pain-filled eyes loomed as Gavin tossed a ragged blanket— scrounged up from the floor of the smokehouse—over Mischief’s back. He grabbed a handful of the mare’s mane, hoisted himself up and took Sophia from Brister’s arms. The soft moan from her lips gave Gavin hope.
Ricochet pranced around the horse. “No! You stay here.”
The dog whined and lowered his massive body to the ground.
“You can’t come this time.”
Ricochet barked.
“Do your damn job and protect what’s left of Arbor Rose.”
“He ain’t gonna stay, Massah Gavin.” Brister shook his head. “No, siree, soon as you a mile down that road, he gonna take off like he after a fox.”
“Tie him up, and tie up that colt too.”
“Yassuh.”
“One more thing.” Gavin tightened his grip on Sophia. “Don’t sleep in the smokehouse or in any building tonight. Cooper will come, and when he does, you don’t want to be trapped.”
Ol’ Nap nodded and grabbed the rope around Ricochet’s neck. Gavin dug his heels into the mare’s sides and disappeared down the long dirt road.

What reviewers are saying….
“The author pens a story that is unlike any other. Land of Falling Stars makes you believe in the possibility of retribution and the hope of finding your brass ring in the last place you look.” 5 stars
“The true hero of this wonderful love story is Ricochet, Sophia’s beloved Wolfound.” 5 stars
“This is the story of a Southern lady and a Yankee soldier who face the aftermath of the War Between the States. A mustread historical #romance story! You’ll need a bucket of icy water to read this HOT story!” 5stars
There is so, so much to this story. You are going to have to buy this one to find out for yourself! BRAVO Ms. Diablo, BRAVO!” 5 stars
“Land of Falling Stars has the ups and downs of a roller coaster and keeps the reader hanging on with bated breath. A ten-star read!” 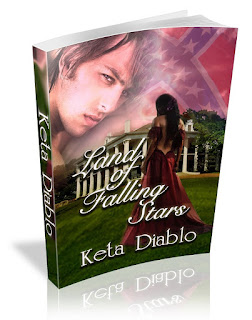 ** Read 25 Five-star reviews HERE **
Thanks so much for dropping by!