The 1st book in the series and the latest installment! 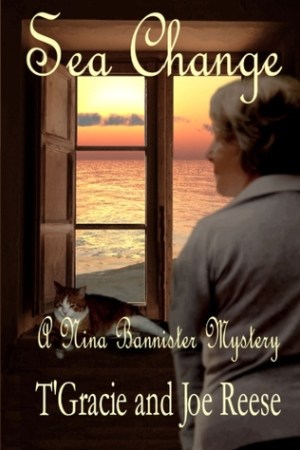 Bay St. Lucy is a sleepy little Gulf Coast community––and that’s the way its residents like it. Most of them generally ignore the monstrous old Robinson mansion that sits in the center of town, until one day, insane old man Robinson dies and leaves the house and its accompanying fortune to the town. The residents are ecstatic and begin planning improved schools and cultural centers. Local retired school teacher and village elder Nina Bannister is sent to the man’s funeral in New Orleans and to represent Bay St. Lucy at the reading of his will. However, Nina returns from her trip saddened to report that a long lost Robinson relative has appeared to claim the entire inheritance. Almost immediately, the new owner––flamboyant Eve Ivory––arrives and announces her own plans to turn Bay St. Lucy into a extravagant vacation resort, not plans that anyone in this small town like at all and ones that will quickly lead to murder. 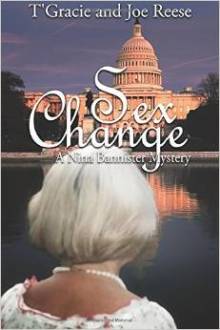 Retired school teacher Nina Bannister has not been idle in her golden years. Now, this famous resident of Bay St. Lucy, Mississippi, is heeding the call of duty again, by running as a replacement candidate for the U.S. Congress, when the state’s present Representative is killed in a plane crash. To her great surprise, Nina is elected, and––to her even greater surprise––she quickly finds that she is not cut out for the lowly life of a newbie––kowtowing to party leaders. When Nina suggests in an off-hand moment (which is secretly recorded by her staff and uploaded to social media) that the government would be better run by women, a nation-wide revolution begins, and Nina becomes its figurehead. Little does she know, however, that a lone disgruntled man is furious with her actions and intends to get his retribution against Nina and all of her followers. Can Nina bring about true change in Washington? Or will her nemesis bring about her demise before she even has a chance to start? This all happens when Nina Bannister goes to Washington and national politics undergoes a SEX CHANGE.

We’ve been writing cozy mysteries for several years now (our seventh in the Nina Bannister series will be out later this spring.) During this time we have thought constantly about what it takes to be a true cozy. Some of the rules seem relatively obvious: the protagonist is usually an older woman. She may be a retired teacher or librarian or she may be an ex-police officer or coroner. In any rate, she is clever and usually uses her wits rather than pure brawn to get to the murderer before the police can. There is very little violence, practically no obscene words and little or no overt sexuality.

All these things everyone knows.

But where are the boundaries exactly? Does the town or village have to be a particular size, say, no more than 2500 people? Could a cozy take place in London or New York? Must it be in New England (a sea coast town such as Jessica’s Cabot Cove)? The answer to these questions is no, but depending. A true cozy can take place in Milwaukee, as one of Nanci Rathbun’s cozy does. The key is not the size of the city but the author’s ability to make us the reader, as well as her protagonist and friends, feel as though they are part of a neighborhood. Chicago, Boston, Philadelphia—are not all of these places simply collections of Cabot Coves, each containing their share of loveable, eccentric characters, all feeling a part of the city itself, but also, their smaller community.

And what element is the soul of each community?

For the true cozy enthusiast eating is more important that murder and it is not important how a person dies so long as he or she does so on a full stomach.

With that in mind, we like to make cooking and eating big parts of each book. Sometimes we have Nina and her friends visit actual restaurants and we feed them off actual menus. Other times we take them to fictitious places or allow them the pleasure of cooking in their own little kitchens.

When Nina is in Lafayette, Louisiana, where two of her adventures take place, she loves eating and drinking. She begins with cocktails at wonderful Jolie’s and chooses from a cocktail menu including: Jolie, Sazerac, Cavendish, The Revivalist and her favorite, containing spiced rum, white ale-caraway syrup, satsuma juice, allspice dram and chicory pecan bitters. In any restaurant in Cajun land, she loves:

When Nina goes to Washington, D.C. (in the novel Sex Change) she is taken by her newly-found African-American friend, Laurencia Dalrymple, to Ben’s Chili Bowl. The Bowl is a landmark restaurant in D.C, located at 1213 U Street, next to Lincoln Theatre, in the Shaw neighborhood of northwest D.C. It is famous for “original chili half-smoke” and that is what Nina eats when she goes there. She also notices a famous sign, which for years stated that “Bill Cosby is the only person who eats for free at Ben’s Chili Bowl (she also notices that on November 3, 2008 a new sign was posted to add “the Obama family.”)

We do not have space here to include all the delicious recipes Nina and her friends have enjoyed while they build up strength to catch murderers. Suffice to say, that in her life, every meal is an experience. Whether she eats with Margot and Sergio’s by the Sea (well, not really by the sea, but who’s being picky), or picks up a morning croissant at Bagatelli’s; whether she filets one of the white fish she has caught that morning in the Gulf with Penelope Royale or pops into the Napoleon House for a snack of Boudin sausage; whether she dines at the Krebsenkeller in Graz, Austria (Frame Change) and has a Nachtigaller (Nightingale) white wine with a bowl of Ungarischegoulasch (Hungarian goulash) –or simply chows down the basketball team (Game Change) devouring breaded veal cutlets with cream gravy at Dee-Tee’s at Bay St. Lucy (the most unhealthy restaurant in the world) she eats like a mystery queen.

We hope all of you do, too, albeit vicariously as you enjoy The Nina Bannister Mysteries. 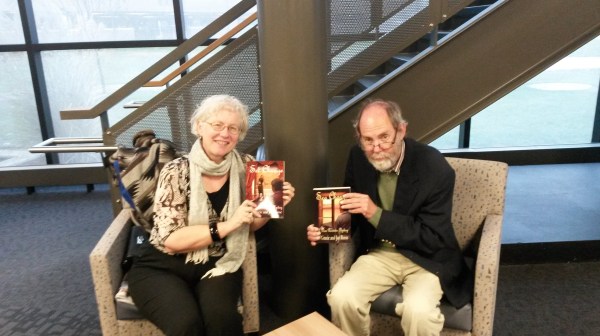 Pam (T’Gracie) Britton Reese is an Assistant Professor in the Communication Sciences and Disorders Department at Indiana-Purdue University at Fort Wayne. She has published books about autism with LinguiSystems. She enjoys teaching and research, but is never happier than when plotting (with her husband) a new murder, or coming up with ways that Nina Bannister can solve it.

Joe Reese is a novelist, playwright, storyteller, and college teacher. He has published seven novels, several plays, and a number of stories and articles. He and his wife, Pam have three children: Kate, Matthew and Sam.

Other Books In This Series

March 17 – The Gal in the Blue Mask – Review, Interview

March 22 – Escape With Dollycas Into A Good Book – Spotlight

Giveaway is for 1 Kindle e-book of Sex Change.  Just leave a comment to be entered.