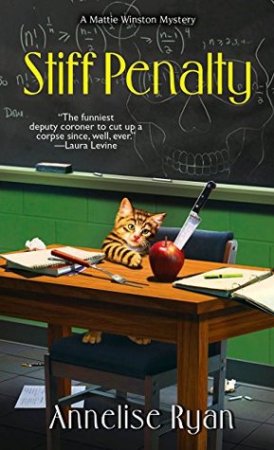 Deputy coroner Mattie Winston knows a thing or two about dead bodies. That’s why she’s on the case of Derrick Ames, a high school math teacher stabbed to death with a barbecue fork straight to the heart. Sure, she’s turned up some motives and a few suspects, but nothing adds up. Especially when the evidence points to Ames’s teenage son. Newly pregnant Mattie can’t believe it, even as her own long-estranged father may be following her. But one thing’s certain, she’d better start figuring things out fast, or a deadly perpetrator could be subtracting two more victims from the population of Sorenson, Wisconsin… 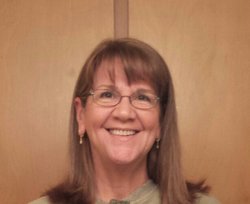 Annelise Ryan is the pseudonym for the author of three suspense novels and another mystery series. She has written more than 200 published articles, worked as a book reviewer for Barnes & Noble®, and is an active member of Mystery Writers of America and International Thriller Writers. She currently works as a registered nurse in an E.R. Visit her at mattiewinston.com.

Babs….When did you know you wanted to write?
I’ve wanted to write and have written since I was old enough to know how. I’ve written fiction, nonfiction, poetry, and song lyrics. I loved writing assignments of any kind in school. I kept a diary when I was younger but it got me into trouble so I started making up stories instead.
Babs…..What would you like your readers to get out of Stiff Penalty)?
Hopefully readers will get a few hours of entertainment while they try to solve the mystery, with some good laughs along the way. I’d imagine that by now most of the readers are vested in the characters and their lives, so I hope this next installment moves them along in a way that is satisfying and stimulating. If someone reads STIFF PENALTY as the first in the series, I hope they will be intrigued enough with the characters and the story to read the rest of the series.
Babs….How did the series come to you?
The idea for the series came to me with a thought I had while observing my first autopsy. I was worried about how I would deal with it, and feared I would wuss out and get sick, or faint, or something equally as embarrassing. When the time came, I thought I’d be okay with the sights given that I was a nurse and had seen both dead people and surgeries before. But I wasn’t at all sure about the smells. When that first odor hit me, I thought, Huh, the inside of a dead body doesn’t smell all that different from the inside of a live one. My writer’s brain instantly recognized that thought as a great first line for a novel and the story was born from that. It’s the only novel I’ve written that came about that way.
Babs…..Do you have a current project in the works?
I’m working on the seventh book in the Mattie Winston series: STIFF COMPETITION. It should be done soon, and then I’ll start working on book four in another series I write under a different pseudonym, Allyson K. Abbott.
Babs…..Do you have a ritual when you are writing? ie coffee, music, food etc.
Coffee…always coffee. Sometimes music, sometimes not, but if I do it’s instrumental music only. And I have a love affair with sticky notes. I track all my novel’s key points, characters, and plot ideas on sticky notes. They end up everywhere. I’m thinking of developing a whole new office design centered around the things. I’ve tried using a notebook, but I always come back to the sticky notes.
Babs…..Hobbies outside of writing?
I used to be a competitive Scrabble player, participating in tournaments and such. But my work schedule these days makes it hard to make the tournaments, so I mostly just play online. I also dabble in stained glass.
Babs….What book or books are you currently reading?At the moment I’m reading AS YOU WISH: INCONCEIVABLE TALES FROM THE MAKING OF THE PRINCESSBRIDE by Cary Elwes.

Babs….If you could be one character from one of your books who would it be?
I’d have to go with Mattie Winston. She is the character who is most like me already, and she gets to say and do things that I only dream about. Plus, I’d love to have her job. And her boyfriend. (Don’t tell my husband!)
Babs…..What is your favorite desert?
If you truly mean desert, I’d have to say the Sahara. If you mean dessert, it’s strawberry shortcake made with real, homemade shortcake, the recipe for which comes from my 1960s era Betty Crocker cookbook.
Babs….What is your favorite Kitchen Gadget?
I love, love, LOVE kitchen gadgets even though I don’t cook all that often. My favorite is a toss-up between a mini food processor I have and use all the time, and a little rubber tube that’s a miracle device for peeling garlic. I use a lot of garlic when I cook.
Babs…Anything else you would like to add? ( links to any blogs/sites to follow etc)
www.bethamos.com
www.mattiewinston.com
www.mattiewinston.com/blog/

The Cha-Cha Babes of Pelican Way by Frances Metzman

Give the Devil His Due by Steve Hockensmith with Lisa Falco blog tour, giveaway and review