Chris Pavesic continues the amazing story of Cami Malifux with Book 2 of the Revelation Chronicles.

Escape from a world of darkness into a magical realm of limitless adventure. 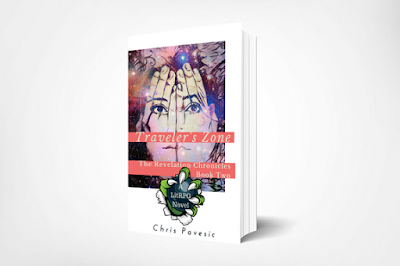 In Starter Zone, Cami kept herself and her younger sister Alby alive in a post-apocalyptic world, facing starvation, violence, and death on a daily basis. Caught by the military and forcefully inscribed, Cami manages to scam the system and they enter the Realms, a Virtual Reality world, as privileged Players rather than slaves. They experience a world of safety, plenty, and magical adventure. Indeed, magic, combat, gear scores, quests, and dungeons are all puzzles to be solved as Cami continues her epic quest to navigate the Realms and build a better life for her family. But an intrusion from her old life threatens everything she has gained and imperils the entire virtual world. 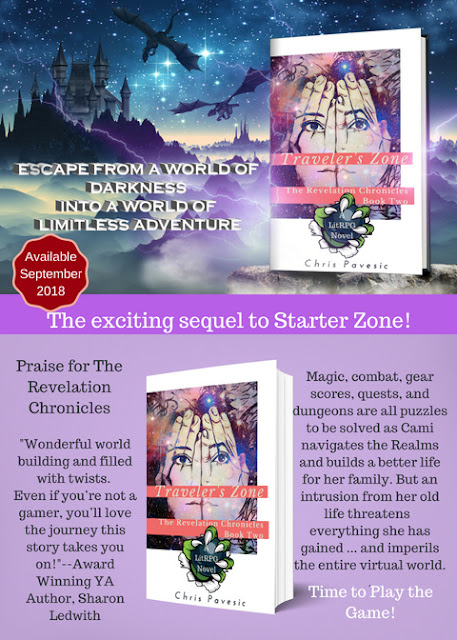 I was born into a world where silicone still ruled. Where the products of the earth outshone those of the sea. Integrated circuits ran all electronic equipment and scientists strove to make the conducting lines smaller and smaller. Silicon Valley tried, and failed, to make chips fast enough to upload human consciousness.

The Revelation came a few years later from the hydrologists. They designed a system that did not use silicone, but instead worked with water molecules. The hydrologists managed to imprint the consciousness of a human mind on a single drop of water.

The water was to be kept in self-contained, sealed aquariums—pure, undiluted, eternal—where virtual realities were constructed to meet every need and desire. All of human knowledge encoded and stored in literal pools of data and integrated with the drops of human consciousness. It was, the hydrologists claimed, utopia achieved.

The obscenely rich were the hydrologist’s first clients, many taken near the end of their lives. The procedure did not always work, but there were enough successes to spur people’s interest. People suffering from terminal illnesses volunteered to be inscribed, and the hydrologists worked and refined their process. Private companies formed and competition forced price wars. Hundreds of customers grew to thousands, and then to millions. There were landmark court cases arguing whether or not health insurance should cover the cost of the inscription–whether or not this was a medical procedure designed to save lives or a form of physician assisted suicide. The law struggled to decide if life ended when the body was drained to a dry, leathery husk, or if life continued inside those glowing, sealed aquariums.

I was thirteen when the governments seized control of the laboratories, first in the Eastern European countries. Then the labs of Europe and the Middle East were swallowed up. Terrorist attacks soon followed and destroyed most of the civilized world over the next three years. The United States, Canada, and Greece, those bastions of democracy, did not fall until the very end. Of course, by then no one cared whether or not the government or the private companies ran the uploading programs. Many of the aquariums ruptured in the strife and the droplets, imbued with human consciousness, re-entered the water cycle of the planet.

The destruction of the aquariums led to a moment of serendipity. Once the hydrologists learned that the human minds survived outside of the aquariums, they designed a world-wide system of interlocking realms to host the inscribed human minds. Right now the realms exist in Challenger Deep, the deepest known point in the Earth’s seabed hydrosphere, but the hydrologists have plans to expand their reach into the rest of the world. Soon, the only life left on the planet will exist in the virtual world.

Time to play the game.

Praise for the Revelation Chronicles:
“She entered the game and I was hooked. I don’t even
play that kind of computer game, but the story was as addicting as I imagine a
real MMORPG to be. Each level up, each new character, each new threat drew me
in. I wish I could read the next book already!” –Kata, NetGalley Reviewer
“I love the dystopian genre, and a lot of the problem I
run into is a lot of them are boring and follow the same storyline. This one is
so different it’s amazing. I cannot recommend this enough. It’s sci-fi, it’s
dystopian, and it fresh. A definite must read that I plan on reading
again!” –Liliyana S., NetGalley Reviewer
“Both sisters are strong female characters who are good role
models for young girls.  This story is
filled with suspense and adventure with a taste of the gaming world.  It is the first LITRPG book that I have read
and I really enjoyed it.” –Teresa O, Educator
“This book was amazing! The story line, along with the
development of the characters was phenomenal. This book is very well paced, and
easy to follow. Seeing the story play out for the characters, along with the
lessons you gain from reading this book, makes it one of my new favorites. For,
this book is more than just another dystopia novel. It’s basis is on family
love, and what you’d do to keep them safe. It’s a young adult novel, yet is
appropriate for anyone above the age of 10. I would highly suggest reading this
book ASAP. You won’t regret it!”–Almaz D, Reviewer
Book 1:Starter Zone

Want to learn more about The Revelation Chronicles? Check out chrispavesic.com for updates on this and her other series.Meet the Author: 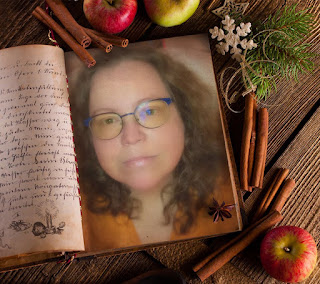